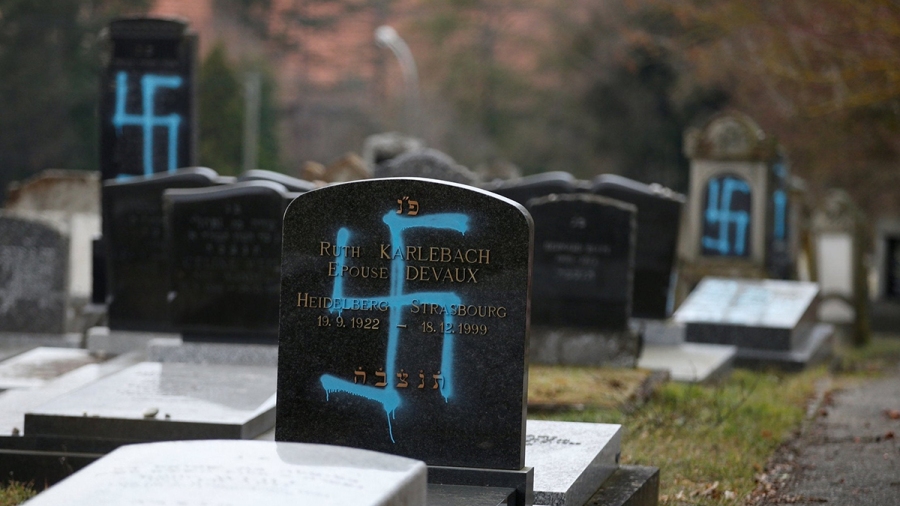 Right or Left, Antisemitism Is a Cancer Which Must Be Resolutely and Honestly Tackled.

When New York mayor Bill de Blasio warned the city’s “Jewish community” that “the time for warnings has passed”, it understandably set many American Jews’ danger senses tingling. But, while de Blasio’s tweet wasn’t textbook antisemitism, it was very disturbing – especially in a city which is fast becoming the epicentre of American antisemitism.

As Melanie Phillips writes, antisemitism and Nazi imagery are now on rampant and brazen display in the West. But not where you’ve been lead to think.

The Boycott, Divestment and Sanctions (BDS) movement is as de rigeur for any self-respecting leftist as a rainbow avatar on their social media profile. While the BDS movement splutters its mealy-mouthed defense that it’s anti-Israel, not anti-Jews the evidence shows that they protest decidedly too much.

BDS was founded by a rabid antisemite who publicly propounds Israel’s “euthanasia”. Its frequent rallying cry, the Hamas anthem “From the river to the sea”, is itself an explicit call to erase the Jewish homeland from the map. Pro-BDS academics are filmed screaming abuse and waving money in the face of Jews. Beyond the rhetoric, evidence shows that rises in antisemitic violence is strongly correlated with BDS activism.

But it’s in arguably America’s most Jewish city that antisemitism is worryingly spiking. Not that you’d know it, if you listen to the Trump-deranged mainstream media which obsesses about supposed, often fake, hate crimes against blacks and Muslims. In fact, the real hate crime spike is elsewhere.

“If you look at hate crimes against Jews, it dwarfs the hate crimes against Muslims,” says Robert Cherry, economics professor at Brooklyn College. Despite the rivers of lies from the mainstream media, it’s not MAGA-hat-wearing Trumpers suddenly beating up and killing Jews. Both the Pittsburgh and California synagogue shooters, while right-wingers, railed against Trump for being too pro-Jewish and too pro-Israel.

Anti-semitic creeps like the Pittsburgh shooter Robert Bowers might be festering boils on the backside of the right, but the left’s antisemites are the pustulous acne emblazoned across the face of the left.

“In New York, where virtually all of the assaults have been by African-Americans,” says Cherry. “This is not a right-wing problem.”

Cherry nominates leftist black groups like the Nation of Islam and the Black Israelites. Legal academic Alan Dershowitz also points to Black Lives Matter. Democrat superstars like Rashida Tlaib and Ilhan Omar are repeatedly involved in antisemitic controversies. Jesse Jackson talked about “Hymies”. Keith Ellison, was a long-time member of the Nation of Islam and defended the odious Louis Farrakhan – a “preacher of hate” and “the moral equivalent of a leader of the KKK”. Farrakan’s list of anti-semitic rants is lengthy and nauseating.

The founder of the “slavery reparations” movement, Robert Brock, was a vicious antisemite associated with neo-Nazi groups like the Aryan Nation. Brock wanted to establish a black ethnostate (Wakanda?) to complement the Aryan Nation’s white one. Both agreed: No Jews Allowed. Brock’s Jew-hating record is knowingly obscured by leftist organs from the New York Times to the SPLC.

Outside America, antisemitism is “endemic” in Britain’s Labour Party and its most recent prime ministerial candidate. The Australian Greens and Labor are dogged by festering antisemitism. Australian universities are becoming more and more unsafe for Jewish students.

Dershowitz warns against such hard-left antisemites. Antisemitism is rising on the right, he says – but that’s merely the right “almost catching up with the anti-Semitism on the hard left which has been in existence for 20 years”. It’s the left’s deep-seated and brazen anti-semitism, Dershowitz says, which is emboldening the right.

Right or left, antisemitism is a cancer which must be resolutely and honestly tackled.

For the right, the challenge is to confront the noisy fringe gibbering about “kikes” and nudging and winking about “the Rothschilds”.

For the left, the challenge is not just to cop to its endemic antisemitism, but to ditch the ideological crutches that foster it: the left’s strange affection for radical Islam, relativisation of oppression and devaluing of words.

Oppression is the left’s golden ticket to power. So they seek out oppression everywhere. Even oppression so trivial as to be literally “micro” is treated as morally equal to the attempted extermination of a people. With everyone demanding equal-opportunity access to victimhood, the Holocaust is, in the words of Extinction Rebellion, “just another fuckery”. Official literature for Britain’s 2020 Holocaust Memorial Day even managed to omit any mention of “Jews”. But it did make special mention of Rohingya Muslims in Myanmar.

At the same time, the left routinely call everyone “Nazis”. Even Jews are “Nazis”, now. Nazis and the unique nature of their crimes have been diminished to mere swear-words.

When you hand-wave away the great crime committed against the Jews like that; when you trivialise the Nazis by calling everyone a Nazi – you forget where Jew-hating can end up.

Then it becomes that much easier to become a Jew-hater.